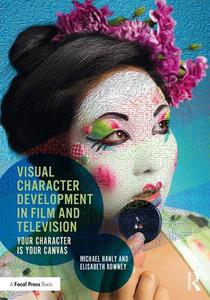 Visual Character Development in Film and Television: Your Character is Your Canvas By Michael Hanly, Elisabeth Rowney
2019 | 182 Pages | ISBN: 1138186546 | PDF | 23 MB
This book takes a unique look at visual character development in motion pictures and television by using famous works of art combined with modern works of film and television to demonstrate how to weave a visual tale. In a single shot or scene, what should we reveal about a character? What should we conceal? How can we show a character's progression over time? In Visual Character Development in Film and Television, authors Michael Hanly and Elisabeth Rowney explain how to create compelling visual characters for the screen by analyzing fine art aesthetics and combining them with modern cinematic techniques. Full-color chapters cover character-driven approaches to costume design and makeup application, production design, cinematography and lighting, Description development, editing considerations, and more. By exploring how surroundings, habits, lifestyles - even the color of a sweater - can tell us more about a character on the screen than what can be said in dialogue alone, this book will prove a valuable resource for anyone wanting to take their filmmaking to the next level.