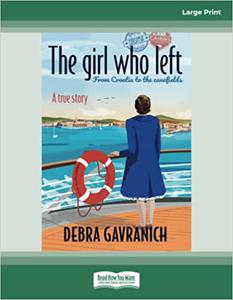 Debra Gavranich, "The girl who left: From Croatia to the canefields [large print edition]"
English | ISBN: 0369378725 | 2022 | 388 pages | EPUB | 10 MB
Marija lives in a small village on the idyllic island of Korcula off the coast near Split in the country now known as Croatia. At 18 years of age she agrees to a proxy marriage to a 27-year-old sugarcane farmer in Far North Queensland who had left the village as a small child with his family in the 1920s. The couple do not know each other, having only exchanged photographs and a handful of letters, but this marriage is Marija's escape from a traumatised post-war Europe. Her childhood is scarred by constant fear, with death and brutality stalking the island after it is occupied, first by the Italian army and later by the Nazis. Marija's older sister joins the Partisan rebels as a codebreaker for General Tito, while Marija and her younger sister and father secretly help the Partisans hiding in the hills, with intelligence on the enemy. At one stage, her beloved father is taken by the Nazis, only to return at the end of the war grateful to be alive. Bitter ethnic battles accompany this war and many from her village are tortured and killed. A life in Australia with a husband she does not know is a risk worth taking. She travels by ship to Australia along with hundreds of other young men and women seeking escape from poverty and despair in the old world to the promise of adventure, love and a better life. Finding herself sharing a farmhouse with a hostile father-in-law far removed from neighbours, in the midst of cane fields in tropical Queensland, was only bearable as she fell in love with her devoted husband, created her own family and with it, a future for the next generations in the new country. At 62, Marija is diagnosed with cancer so returns one last time to Korcula to farewell her family. However, Yugoslavia is imploding, and she finds herself once again fleeing tanks in the midst of a war. Shortly after returning from her trip, she passes away, surrounded by her Australian family in the country she has come to feel is truly her home. This is the migrant story of Australia, of courageous individuals taking the biggest risk of their lives often with little or no English. Their determination and hard work enable them to live with their sacrifices and overcome the profound loneliness of homesickness. The result is the rich diversity of our modern multicultural nation.