Rebel King The Making of a Monarch 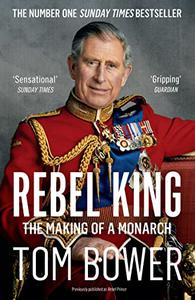 Bestselling author Tom Bower reveals the making of a monarch - King Charles III
King Charles faces many challenges as he succeeds his mother to the throne. Despite his hard work and genuine concern for the disadvantaged, King Charles III has struggled in the past to overcome his unpopularity. After Diana's death, his approval rating crashed to four per cent and has been only rescued by his marriage to Camilla.
In unearthing many secrets and dramas surrounding King Charles, Bower's book, relies on the testimony from over 120 people employed or welcomed into the inner sanctum. The result is a book which uniquely probes the character and court of Charles that no one, until now, has seen. It offers an unrivalled and intimate look at King Charles, his many years as heir and how a monarch was made.
Fikper
uqw20.R.K.T.M.o.a.M.rar.html
Rapidgator
DOWNLOAD FROM RAPIDGATOR.NET
NitroFlare
DOWNLOAD FROM NITROFLARE.COM
Uploadgig
DOWNLOAD FROM UPLOADGIG.COM
Please Help Me Click Connect Icon Below Here and Share News to Social Network | Thanks you !
Download from:
DOWNLOAD
voska89
17 January 2023
Add
to favorites
Comment to post(0)
Information
Users of Guests are not allowed to comment this publication.
Adventising
Friends
Best Hosting & VPS OneDDL.org DesireFX 0Day Home