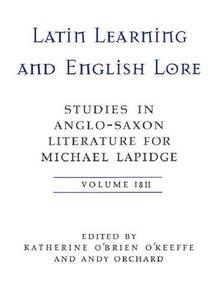 Latin Learning And English Lore: Studies in Anglo-Saxon Literature for Michael Lapidge. Vol. 1-2 By Katherine O'Brien O'Keeffe, Andy Orchard (eds.)
2005 | 930 Pages | ISBN: 0802089194 | PDF | 46 MB
Throughout the Anglo-Saxon period, Latin and Old English were, to large extent, alternative literary languages. 'Latin Learning and English Lore' is a collection of essays examining the complex co-existence of the two languages within the literary, historical, and cultural milieu of Anglo-Saxon England. More than forty of the leading Anglo-Saxon scholars in the world today have contributed to this two-volume survey of the whole range of Anglo-Saxon Literature in honour of Michael Lapidge, one of the most productive, influential, and important figures of Anglo-Saxon studies in recent years. The contributors include a wide range of the Lapidge's former colleagues, students, and collaborators.The essays in 'Latin Learning and English Lore' cover material from the beginning of the Anglo-Saxon literary record in the late seventh century to the immediately post-Conquest period of the twelfth century. The volumes together provide an invaluable survey of the rich literature, history, and culture of the period as well as a selection of groundbreaking studies that offer a number of exciting possibilities for future research.