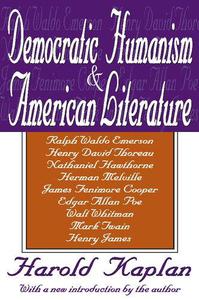 Democratic Humanism and American Literature By Harold Kaplan (editor)
2005 | 335 Pages | ISBN: 1412804736 | PDF | 34 MB
Democratic Humanism and American Literature illustrates the interplay between democratic assumptions and literary performance in the America's classic nineteenth-century writers--Emerson, Thoreau, Hawthorne, Melville, Cooper, Poe, Whitman, Twain, and James. Harold Kaplan suggests that these major figures' works are linked by the myths of genesis of a new political culture. Challenged by the democratic ideal, and committed to it, they wrote prophetic books in the American liberal tradition and endowed its ethical intelligence. The task of stating a new and undefined freedom was always implicit and often in the foreground of the writing of these nineteenth-century giants. As the author describes the situation, "the free man had to decide in what sense he was bound by nature or could master it; in what sense he was committed to his society and could reconcile his freedom with it." These classic writers devoted their work to examining this dialectic of values; Kaplan sees their complex and polarized democratic consciousness as seminal in the imaginative tradition they generated. What is unique in that tradition of values is the rivalry of criticism with affirmations of faith. "The highly original ethical trait involved here is based on the capacity of a political society to use its negations against itself and survive." The author suggests that in our own time moral judgments are more likely to be the province of activist politics than literature. His new introduction relates the theme of the book to cultural and political developments in the American experience of modernity and adds a discussion of Wallace Stevens and William Carlos Williams to the figures treated in the original edition. Since tendencies to develop ideological and idiosyncratic responses to extrinsic events have grown stronger over time, it is more important than ever for scholars and students alike to recover a "moral imagination"--the force that gave rise to the great literary works of the nineteenth century. To describe that force is Harold Kaplan's goal in Democratic Humanism and American Literature.