The First Thousand Years A Global History of Christianity [Audiobook] 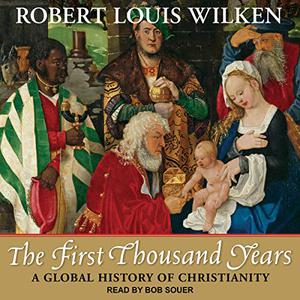 The First Thousand Years: A Global History of Christianity (Audiobook)
English | August 25, 2020 | ASIN: B08FXVKDRX | [email protected] kbps | 17h 51m | 1000 MB
Author: Robert Louis Wilken | Narrator: Bob Souer
How did a community that was largely invisible in the first two centuries of its existence go on to remake the civilizations it inhabited, culturally, politically, and intellectually? Beginning with the life of Jesus, Robert Louis Wilken narrates the dramatic spread and development of Christianity over the first thousand years of its history. Moving through the formation of early institutions, practices, and beliefs to the transformations of the Roman world after the conversion of Constantine, he sheds new light on the subsequent stories of Christianity in the Latin West, the Byzantine and Slavic East, the Middle East, and Central Asia.

Through a selected narration of particularly noteworthy persons and events, Wilken demonstrates how the coming of Christianity set in motion one of the most profound revolutions the world has known. This is not a story limited to the West; rather, Christian communities in Ethiopia, Nubia, Armenia, Georgia, Persia, Central Asia, India, and China shaped the course of Christian history. The rise and spread of Islam had a lasting impact on the future of Christianity, and several chapters are devoted to the early experiences of Christians under Muslim rule. Wilken reminds us that the career of Christianity is characterized by decline and attrition as well as by growth and expansion.
Fikper
vin9j.rar.html
Rapidgator
vin9j.rar.html
NitroFlare
vin9j.rar
Uploadgig
vin9j.rar
Please Help Me Click Connect Icon Below Here and Share News to Social Network | Thanks you !
Download from:
DOWNLOAD
voska89
18 January 2023
Add
to favorites
Comment to post(0)
Information
Users of Guests are not allowed to comment this publication.
Adventising
Friends
Best Hosting & VPS OneDDL.org DesireFX 0Day Home